A very brief synopsis of Albania:

Albania declared its independence from the Ottoman Empire in 1912, but was conquered by Italy in 1939.

Communist partisans took over the country in 1944.

In the early 1990s, Albania ended 46 years of xenophobic Communist rule and established a multiparty democracy.

Albania has made progress in its democratic development since first holding multiparty elections in 1991, but deficiencies remain.

International observers judged elections to be largely free and fair since the restoration of political stability following the collapse of pyramid schemes in 1997; however, there have been claims of electoral fraud in every one of Albania’s post-Communist elections.

The 2009 general elections resulted in a coalition government, the first such in the country’s history.

Albania joined NATO in April 2009 and is a potential candidate for EU accession.

Although Albania’s economy continues to grow, the country is still one of the poorest in Europe, hampered by a large informal economy and an inadequate energy and transportation infrastructure. 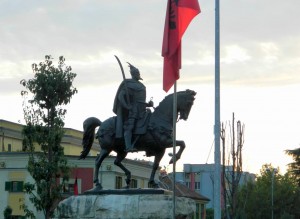 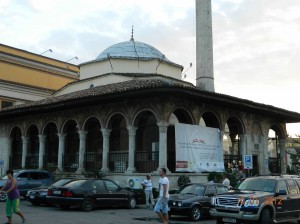 Statue of Skanderbeg (National hero of the Albanians).     Mosque in Tirana